I have been so busy with my exams that i didn't have the time to cook the Boeuf à la Bourguignonne  which requires a lot of time and patience. It is a typical dish from my home region, Burgundy.
Today i will show you how to do it, but without my own pictures. 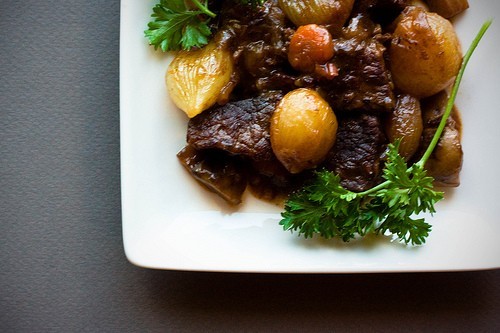 The boeuf bourguignon is a rich stew prepared with beef braised in red wine (bien evidament a full-bodied Burgundy Red. The traditional Burgundy stew requires a meat coming from the Charolais cattle, one of the most known and renewed cattles in France... and world!
Charolais has become an french institution, known for its tenderness and taste. 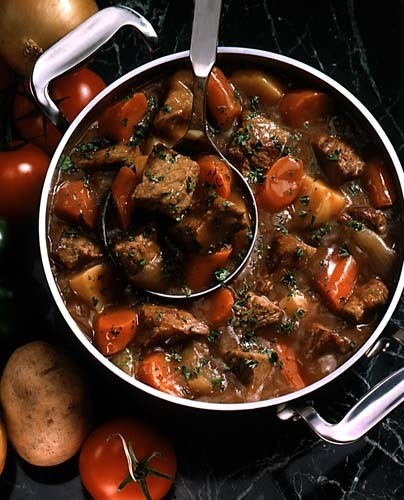 The authentic recipe was first mentioned by Auguste Escoffier at the beginning of the 20th century. He was a french chef and culinary writer who popularized and updated traditional french cuisine.

This is what you will be needing for the stew: 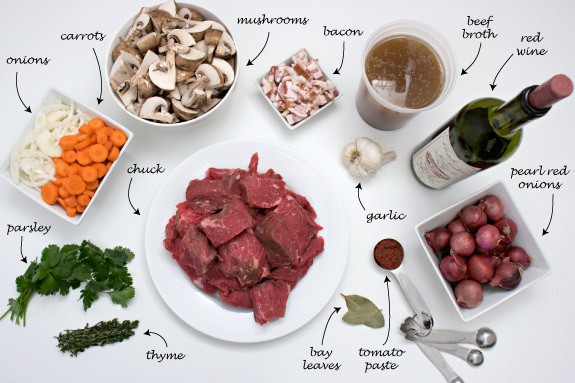 METHOD
Cut bacon into small strips and simmer for 10 minutes in water, dry bacon.
Cook the bacon in a large saucepan with a little olive oil at moderate heat for 2 or 3 minutes, remove bacon.
Cut the beef in cubes, using the same saucepan, cook the beef in the bacon's fat until browned. Remove the bacon.
In the same pan, put the onions, carrots and champignons, cover with beef. Add salt and pepper.
Pour in the wine and enough bouillon so that it covers the ingredients.
Add small white onions, garlic and herbs- bring to a boil.
Cover the pan and simmer for 3 hours on a low low heat.
The meat is done, when the fork slides out easily a beef cube. remove from heat.
Serve with boiled potatoes, rice or pasta.
Bon appétit
Posted by Un coup d'aile at 9:00 AM